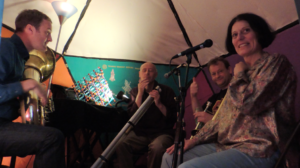 This project was supported by a Musikfonds FEB Stipendium

In this project, TONALIENS made a special tribute to their collaborator Amelia Cuni by placing original recordings of her singing in the Dhrupad style into three new compositions. The instrumentalists in this project play specific roles reflecting on the original raga context and also opening up new settings outside of the Dhrupad tradition. This practice based project combined archival research, musical analysis, solfège exercises, solo and group recordings. 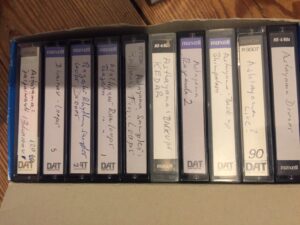 The musical contributions of each ensemble musician provides an accompaniment and reflection of Amelia’s practice which is based on Indian Dhrupad. Amelia has dedicated her musical life to studying, practising and teaching this rich tradition. The new pieces of music we have created are the result of research, exchange, musical exercises and experimentation, opening up new and stimulating perspectives for the ensemble. 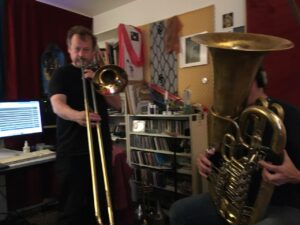 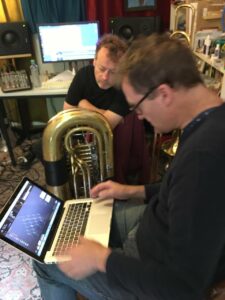 Based on a recording of Amelia’s singing together with the metallic sound of a miniature water mill found in October 2011 by a pond in a forest near Krems, Austria. Amelia sang an improvised melody that focused on the rhythm and the environment, using only three notes and two syllables: TA-NA-NA, DE-RE-NA. She did not sing traditional patterns, but let tradition inspire her improvisations, creating space for discovery. The other elements in this composition are: 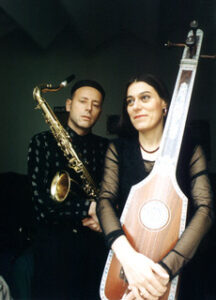 Based on a recording of Amelia singing in Rag Bhopali. The voice is accompanied by a moving texture of cello, saxophone, tambura and electronics that explore the different harmonic spaces suggested by the melodic vocal lines. 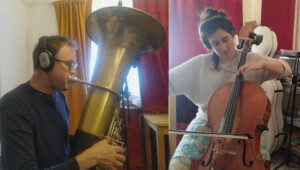 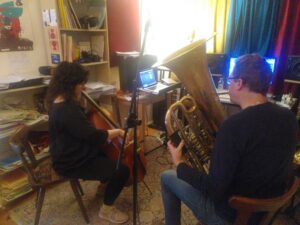 For this piece each musician tried in their own way to learn, play and improvise upon raag Kedar – a challenging raga which is not easy to master. Instead of trying to play completely correctly in the Indian way, each musician found their own way into the feeling and atmosphere of the raga, based on a recording of Amelia singing the real raga. The final composition presents a complex, polyphonic whirlpool of melodic fragments which gradually slows down and thins out, eventually to reveal Amelia singing a composition in raag Kedar.

This project provided me with the time and possibility to investigate some aspects of Indian Raga, including the spatial and tuning possibilities in relation to this subject with my instrument. As a string instrument with fretless fingerboard, the cello shares similarities to Indian musical instruments. My performance practice focuses on durational performance techniques whereby one tone, performed on the cello has an infinite number of timbral and overtone possibilities. When applying this extremely focused approach to cello performance and recontextualising it in an Indian raga setting, Through this work I have started to learn new techniques based on sliding between specific tones, whilst also creating numerous sonorities and textures for the pieces we worked on. 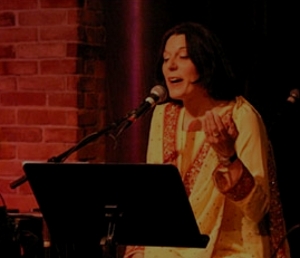 Werner recorded my singing and the metallic noise of a miniature water mill that we found at a pond in a forest near Krems-Austria where we were staying as an artists in residence in October 2011. The other rhythmic patterns that I recite, were recorded and elaborated through digital delays by Werner and they are based on Indian mnemonic syllables used for percussions and dance. The part I sing in English is a text by a Native American tribe and the melody is based on an Indian raag, a pentatonic scale traditionally associated with rain. I composed this in 2010 for a performance with members of the Berliner Philarmonic where I sang in duo with the Australian double bass player Matthew McDonald using a text from Luciano Berio’s work CORO, according to the concept by Catherine Milliken who was leading that project. The vocal line was rather fixed, I wrote it down and recorded it without the double bass since the voice here is autonomous. The text consists of a song by the Zuni Indians invoking the rain, therefore I chose to use raag Megh – the ancient pentatonic scale. I find it very appropriate that Hilary and Robin have played to this recording and that Werner added another piece of mine which I had composed earlier but never published. In this piece of music I hear an exchange among various personalities and traditions, among ancient and modern times, which in my opinion opens up new and stimulating perspectives for the ensemble. 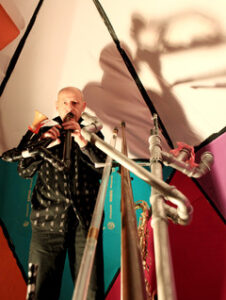 The original idea to go through the archive of Amelia came after we listened by coincidence to her piece „Kedarika“ combined simultaneously with Eliane Radigue’s composition „Occam Ocean for Violin and Cello“. After Eliane and the musicians gave their consent, we created a completely new piece by superimposing the two tracks. We felt that there would be more recordings from Amelia’s archive which could also be exposed to new contexts and settings. The vocal loops in „Watermill“ were originally created in the context of our multi-media stage composition „Astayama- Song of Hours“. I looped individual rhythmic vocal patterns and sent them through several digital delays, in a quasi-analogue way- I didn’t have a computer at the time (end of the ’90s)! In the piece „Kedar“ I play tenor saxophone, referring to the concept of melodic lines and phrasing that I learned while studying the Indian bamboo flute in the late ’70s and early ’80s. In „Bhopali“ I play soprano saxophone as an alternating drone in correspondence with the cello parts. In doing so, I deliberately do without the very stylistic elements used in „Kedar“. These pieces represent two approaches that I have pursued in my years of collaboration with Amelia, both in duo and in various trio formations with percussionists. 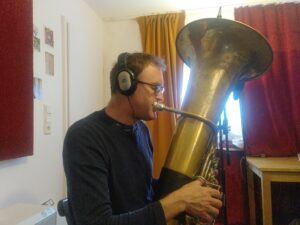 For years I’ve been interested to be involved in projects involving Dhrupad and it was a great experience to play along to the recordings of Amelia, especially the one with the watermill providing the rhythm, as then I was able to choose sounds that mixed both with Amelia’s voice and the watermill. Playing the raga tunings was quite challenging, as the pitches in the recordings on meant finding unconventional fingerings on the tuba. After having analysed the recordings I located the pitches first on the tuning vine, which I then used as a practice track for the actual fingerings. The most rewarding part of the process was to play along with Amelia singing the ragas, as this felt like playing with her live again, and the phenomenal knowledge she has of Dhrupad influenced the way I played. The glissandi and inflections are challenging to play, even on the microtonal tuba upon which it’s only possible to do very slow glissandi. The project has given me ideas how I can address this in the future. It was a truly collaborative project in which everyone contributed uniquely and as in all Tonaliens projects, is something that none of us could have achieved on our own. 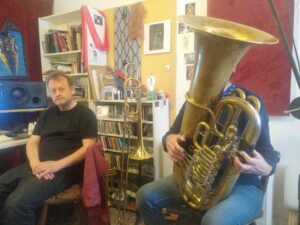 My interest in Indian classical music goes back to my early days as a music student, discovering the trombone, including as an instrument for interpreting ragas. Through my initial studies with Amelia I learnt many new techniques and discovered that indeed the trombone does have some raga playing possibilities, although in comparison to the voice it is still limited. The ensemble Tonaliens grew out of my studies with Amelia as well as just intonation practices with Robin, Werner, Anthea and Judith Hamann. Tonaliens play a form of contemporary modal music informed not only by Dhrupad but also other traditions including jazz, blues and maqam. Rather than trying to become experts in any of these fields, with the exception of Amelia who has dedicated her life to Dhrupad, we have each navigated individual paths through these multilayered musical worlds. The resulting recordings can be seen as snapshots of an unlimited and kaleidoscopic musical world. 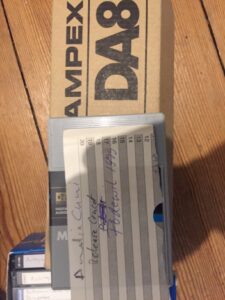 We thank Musikfonds and the jury for the opportunity to honour and preserve Amelia Cuni’s artistic work. Due to her illness, she is no longer been able to actively participate in concert life since 2015. We appreciate all the more the value of the archive recordings and our work with them, as a form of preservation, expansion and re-evaluation. 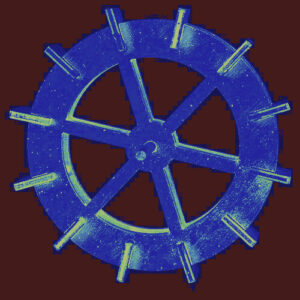